Home
Our Technology
About Us
Investors
LANGUAGES
Eng

Modern X-ray equipment is said to have been digitalized. However, this change ‎has only affected the image capturing, processing, and data storage section - not ‎the actual X-ray tube itself. At the heart of every new X-ray tube, there still is a ‎metal filament that has gone virtually unchanged for the past 100 years. 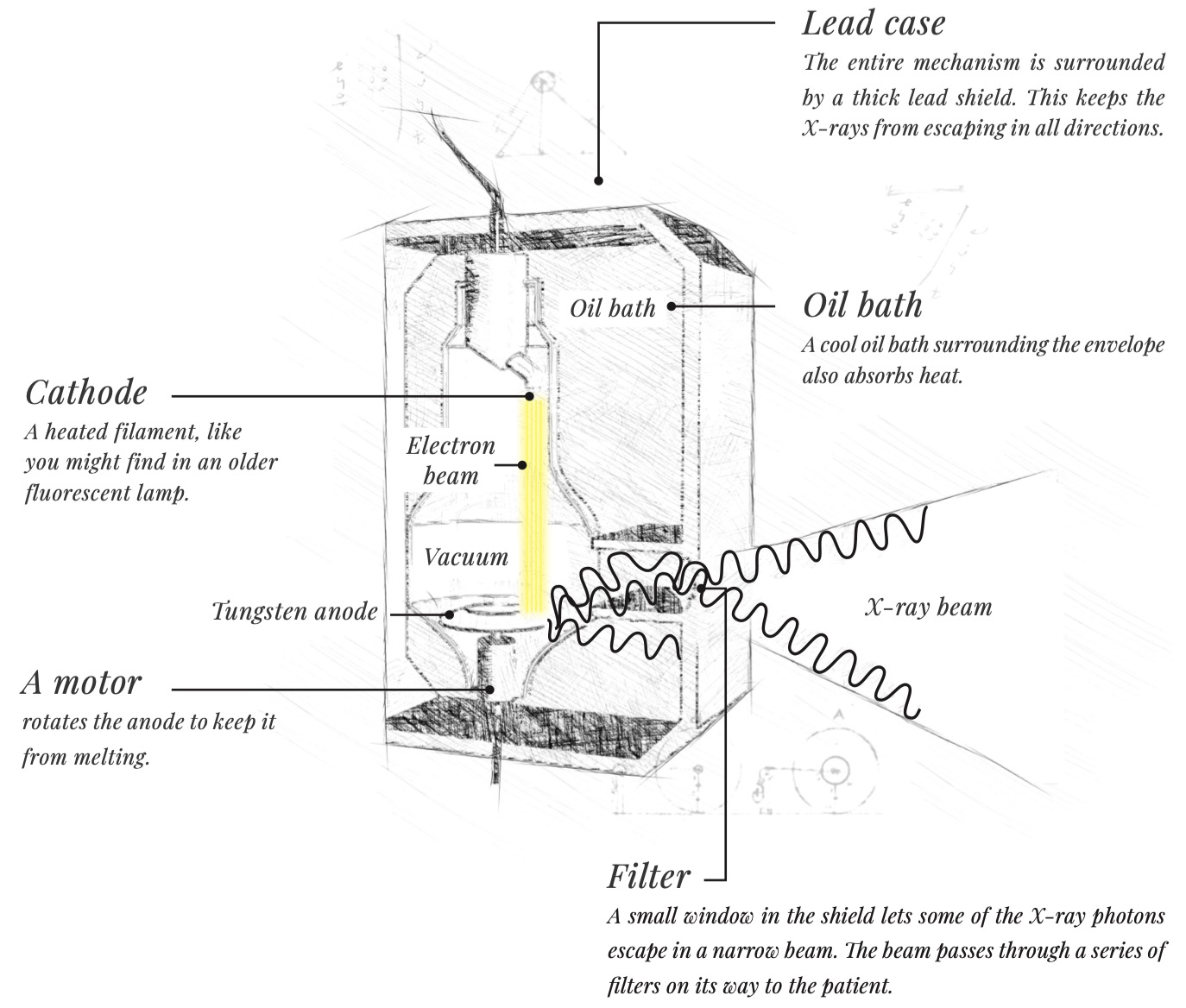 In the early days of the 21st century, several big X-ray players tried implementing non-thermionic electron emission technology, called "Cold Cathode‎" technology - but none achieved significant success. Consequently, medical X-ray tubes still operate using thermionic emission, when all other thermionic tubes are gone in other technology fields. Nanox has a Cold Cathode‎ technology that has solely proved its viability in the electronics industry, successfully upgraded the performance to medical applications, and is developing radiological systems that break some limitations impeded by the traditional hot cathode

What is a Cold Cathode‎?
‍The term "cold cathode" refers to a cathode that is not electrically heated by a ‎filament. While a filament boils off electrons by using heat (called a thermionic ‎emission) - a cold cathode (or a "field emitter") extracts electrons from the metal ‎by an external electric field.‎
‍
A field emission device is characterized by ‎
• A structure to create a strong electric field.
• A method to control the electric field and volume of the emitted electrons.‎

From the 1990s, many electronics companies, including Motorola, Toshiba, Hitachi, ‎Samsung, and ‎others, tried to develop a flat TV based on cold cathode technology. All ‎failed. ‎

However, there was one company, Field Emission Technologies, a Sony spin-off arm, who developed ‎the technical know-how to produce the world's first high-quality FED (Field Emission Display) panel. ‎While the cold cathode ‎principle was not new to scientific researchers, they battled to obtain ample ‎and stable ‎electrons in a non-heat driven emission platform.‎

Nanox had acquired this technology and ported it to the medical imaging field.

Use In Medical Imaging
‍
In the medical imaging sector, using a Field-Emission-type X-ray tube has several desirable properties:‎‎
‍

‎1.‎ ‎Rapid time switching: In a hot cathode, the acceleration of the electrons towards the Anode ‎‎‎(thereby creating X-rays) is done by activating and switching a high voltage supply. This process ‎‎takes time (on the order of milliseconds). ‎In a cold cathode, one can set the high voltage and ‎switch only the gate voltages – a process ‎that can take only microseconds.‎
‍
‎‎2.‎ ‎Rapid intensity change: The Field Emitter current depends on the applied voltage, and the X-‎ray intensity depends ‎on ‎the Field Emitter current. With cold ‎cathode technology, it is possible ‎to uncouple these ‎two ‎parameters, i.e., the current's power is independent of ‎the voltage. ‎‎Thus, the X-ray intensity ‎can be rapidly controlled by increasing the speed ‎of switching or by ‎creating ‎short pulses.‎‎

‎‎3.‎ Colder Mechanism: Electrons are extracted from the metal cathode by an applied electric ‎field‎, while the emitter ‎temperature ‎is significantly lower than that of Hot ‎Cathode (thermionic ‎‎emission) filaments. Hot cathode temperature is ‎over 2000 degrees Celsius while a Cold ‎‎Cathode‎ temperature is that of ‎room temperature‎.‎
‎‎‎
4.‎ Lifetime improvement: A colder cathode has the benefits of a longer lifetime. The ‎hot ‎cathode's longevity is ‎of thousands of patients' lifetime, ‎whereas that of the Cold Cathode‎ ‎is > ‎‎1M patients' lifetime.‎

‎Up until now, Cold Cathodes, including CNT (or Carbon Nano Tube) and standard Spindt cathodes, failed to achieve the ‎quality level, efficiency, and the lifetime required for commercial products.‎

Over nine years of development by a Japanese and Israeli engineering team, produced a ‎stable Cold-Cathode field emission MEMS silicon‎. 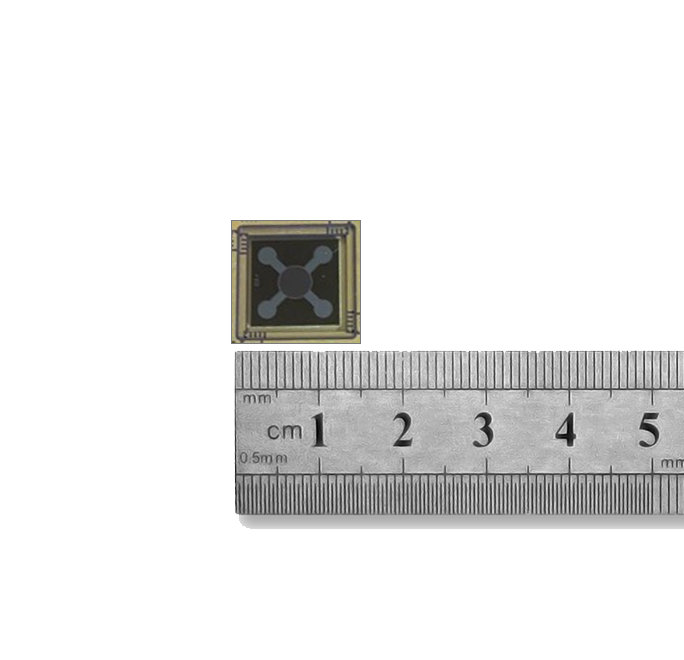 Nanox's cold cathode can generate a specific current irrespective of the anode ‎voltage. The Nanox gate electrode practically "ejects" the electrons from the ‎cathode and controls the amount of X-ray radiation, enabling independent control of ‎the X-ray current (mA tube current) and the energy (kV) that is set at the Anode. ‎

The graph below shows that the tube current is not influenced by the cathode-to-anode ‎voltage, if it is higher than 10 kV. Typical kV in radiography range from 40-120kV and 22-49kV in mammography.
‍
The current can be controlled only by the gate ‎voltage, independently from the Anode - and switched within microseconds.‎ 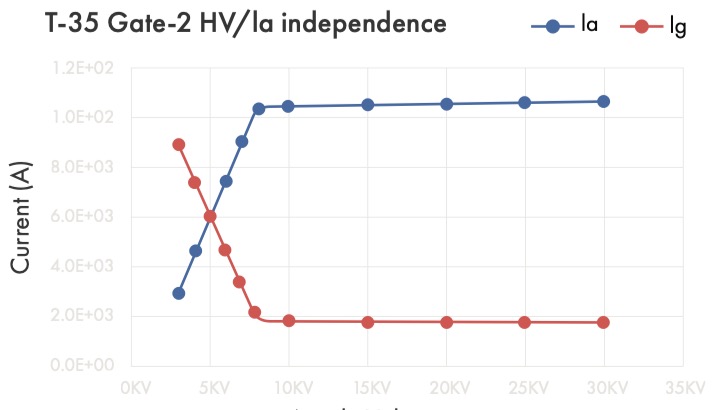 By activating parts of the chip layout, we can control the focus spot size, ‎shape, and location on the target.

Using the analogy of a spark plug within a motor vehicle, instead of a manual ‎ignition, a digital ignition process provides the car's stimulus to start and powers ‎the engine. ‎

The Nanox Source technology represents the "digital ignition" for the "engine" -  ‎
i.e., X-ray tube that powers the X-ray machine to start - and enables it to run ‎efficiently. With this "cool" ignition, X-ray generation is controlled with digital ‎accuracy and is free from much of the heat management requirements. ‎

The X-ray "engine" becomes smart and compact.
‍
X-ray machines, equipped with this digital engine, will advance to a new horizon. ‎Nanox aims to drive a ground-breaking innovation in X-ray imaging for the first ‎time, a century after Coolidge‎.

Nanox cold cathode chips were tested in the real environment of operation - the X-ray tube. Viability as an e-beam for X-ray generation was ‎confirmed, not only in the lab but also in real applications‎.

The Nanox tube can mitigate some of the most significant causes of tube failures, ‎such as:
* Filament burn – alleviating the problem altogether ‎
‍* Anode cooling requirements - can be lowered using several fast, low-cost ‎tubes instead of a single one.
‍* Anode bearing failure
‍* In addition, the Nanox tube can provide a much faster response time while reducing ‎tube size and weight. ‎

This process creates a situation of ‎decreasing wire cross-section, increasing temperature, and high evaporation rate, ‎leading to a catastrophic failure of the filament.
‍
‎In the Nanox tube, the filament was entirely replaced by a silicon chip, alleviating ‎the problem altogether. 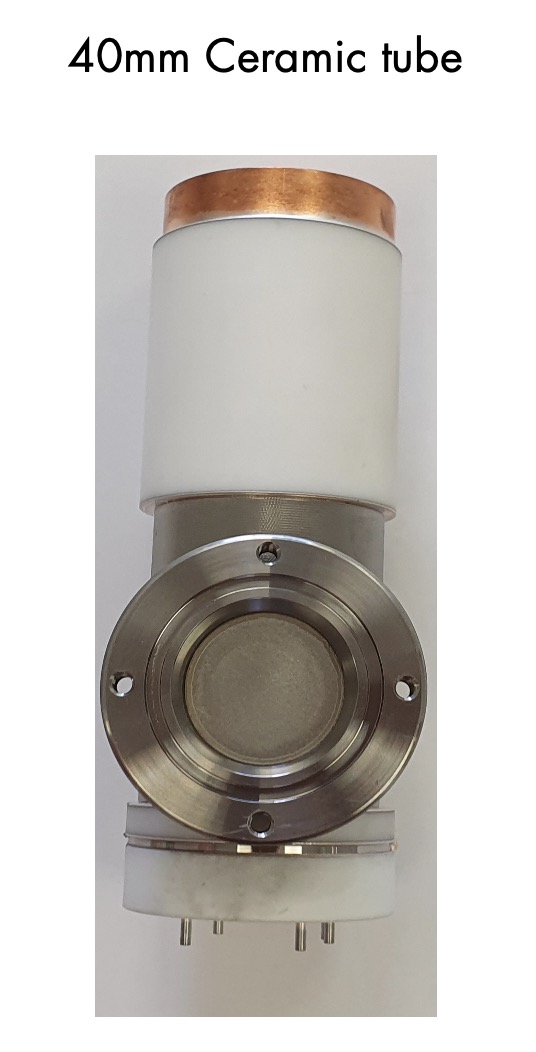 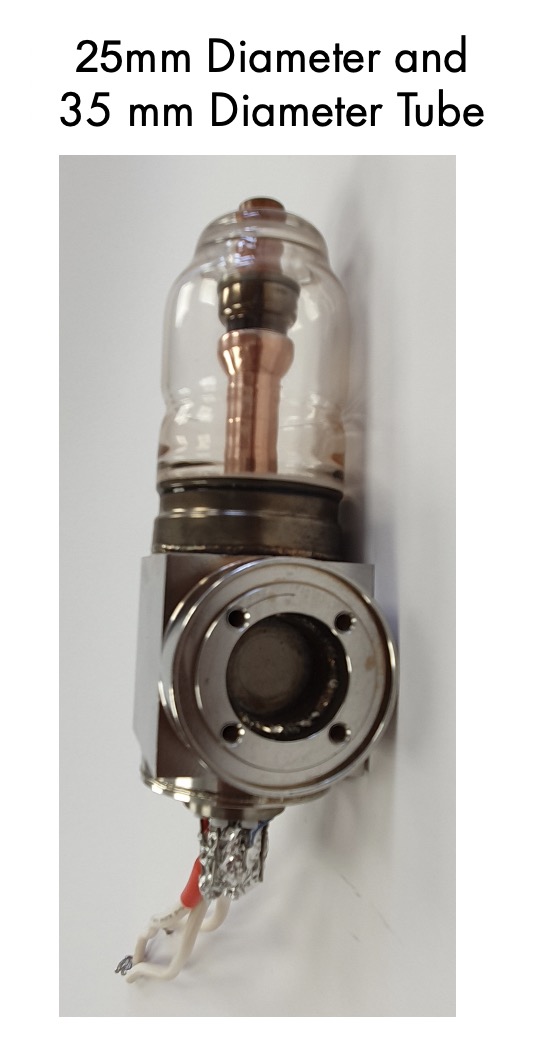 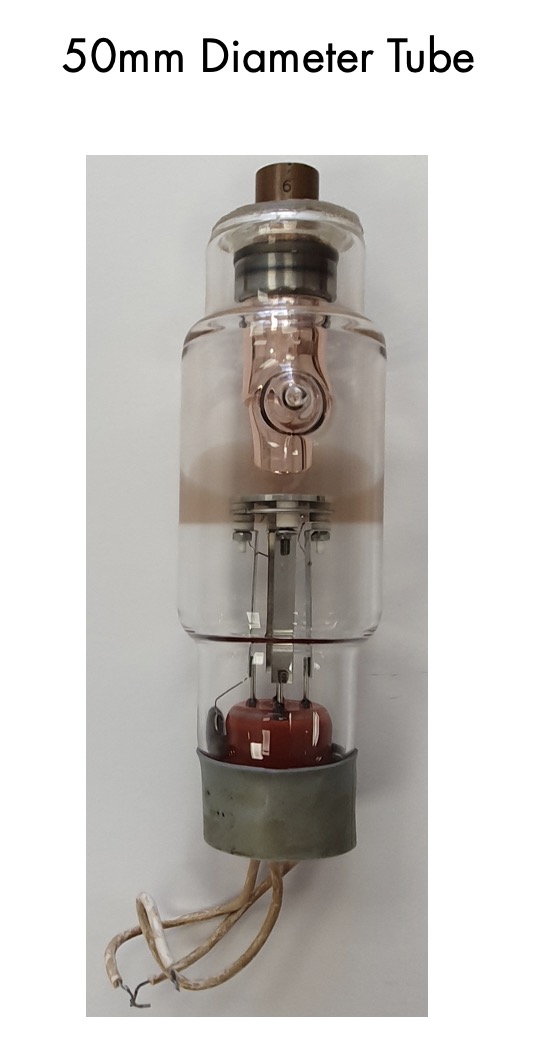 The Nanox Source tubes produce X-rays in a digital form, meaning no ‎filament heat-up is required.

X-rays can be digitally pulsed on and off, using ‎fast and accurate low voltage control - rather than by high kV-switching and ‎the heat-up and cool-down process of a bulky filament.‎

The ‎Nanox tubes are significantly smaller and require less energy to operate, ‎enabling a new generation of medical imaging devices.

Images produced with the Nanox Tube

Concept device for educational purposes only

Nanox has decided to take its core technology to the next level and produce an ‎imaging system based on the novel Nanox digital X-ray source. It can demonstrate ‎all its benefits, including a smaller footprint and lower cost.‎

Using the Nanox tube's unique features, such as its fast response time, small size, ‎and lower cost, we have built a radiographic system called the Nanox.ARC. Nanox hopes to submit for 510K during 2021.

This ‎system uses several Nanox tubes arranged in a curve above a patient's ‎radiographic table. Using advanced image processing techniques such as ‎Tomosynthesis, we can provide advanced imaging where no imaging existed ‎before.‎

We aim for a unique, lightweight design. We have progressed through the ‎development process, with models maturing from stage to stage‎.

Nanox.ARC 1.0 & 1.5 were altered as we better understood the implications of the use of our novel source as it was never before implemented in a live system: 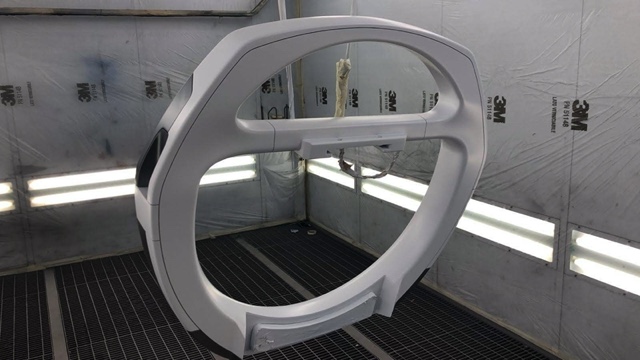 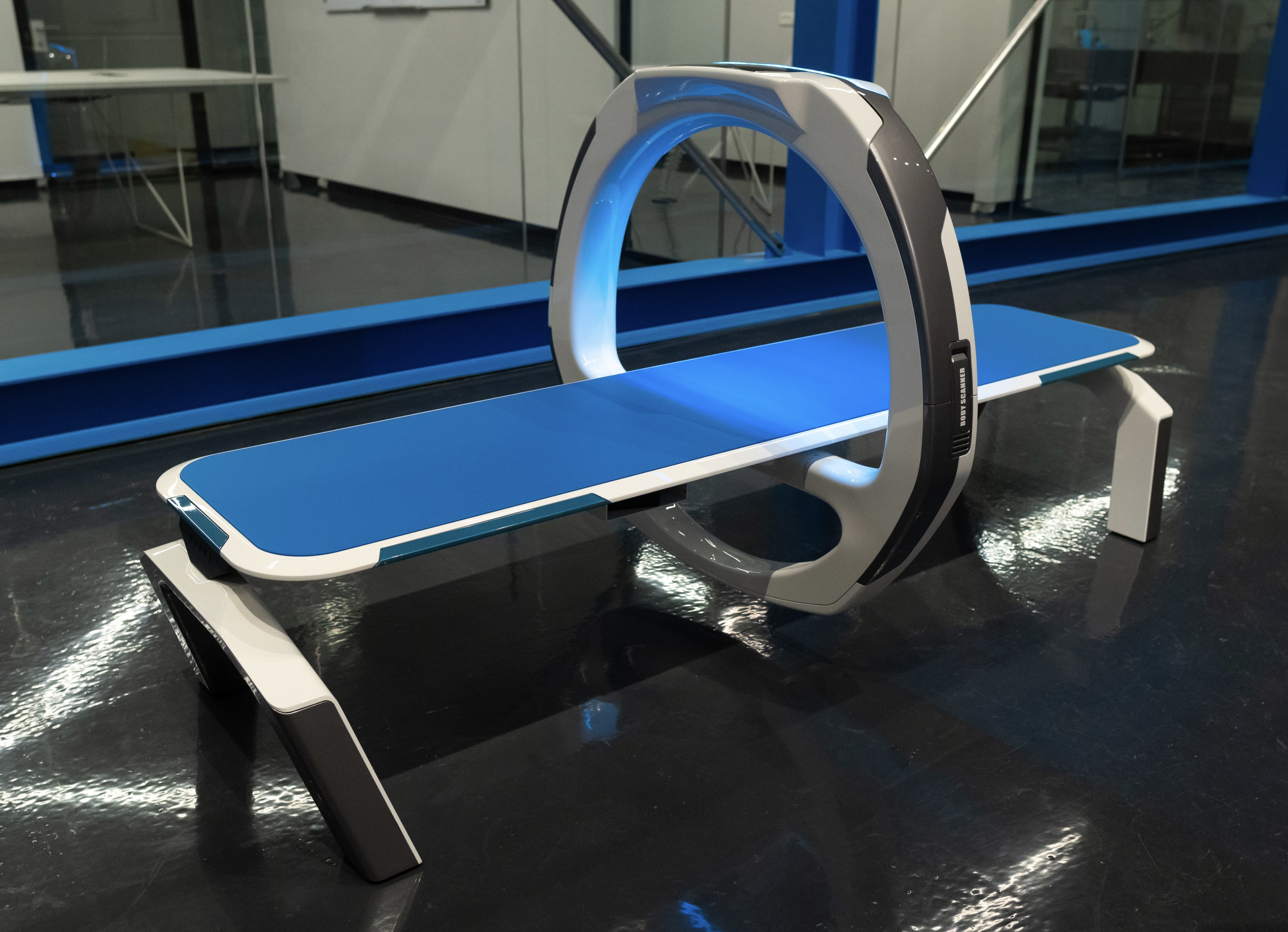 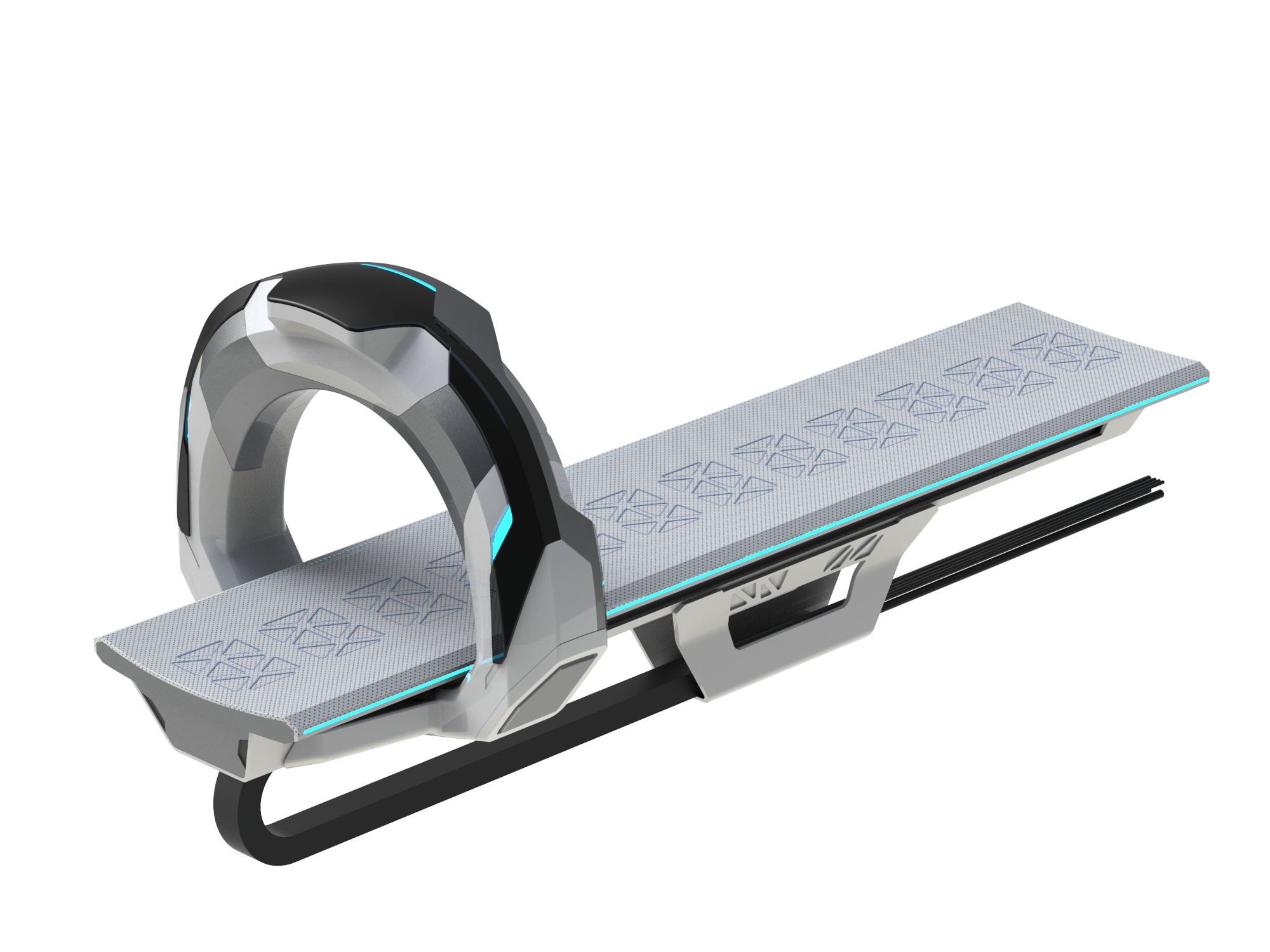 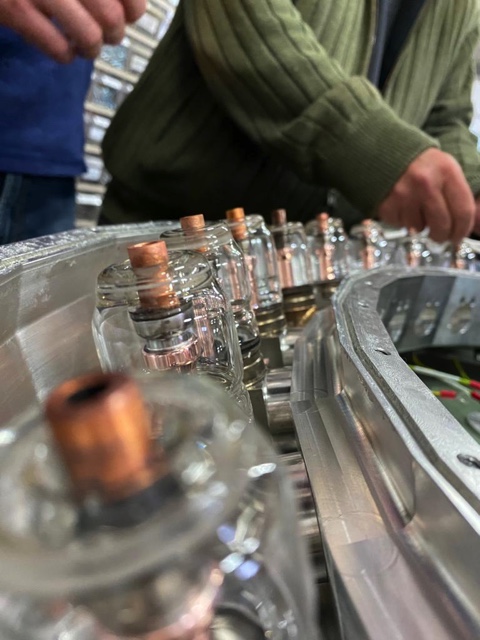